Yune (湯音 Yune) is a young Japanese girl who travels to Paris from her hometown of Nagasaki. She becomes the poster girl of a metalworks shop named Enseignes du Roy. The birthday is December 5.

Yune is a young 13-14 year old girl with short black hair, black irises and a petite physique. She is dressed in the finest kimonos and, in a foreign land such as France, often attracts attention due to her outfit. Claude Claudel has described her as a Japanese doll in his first time seeing Yune.

As a native of Japan, Yune learned about serving people and this has affected how she interacts with people. She usually calls anyone — familiar people and strangers alike — with the honorific -sama, which denotes a high degree of respect, and bows in apology to the smallest mistake she commits. This, along with the culture she was accustomed to, has made her somewhat hard to understand in a foreign country such as France.

She also demonstrates a degree of naïveté when it comes to French customs and culture, and like Claude Claudel's difficulty in understanding Japan, has been struggling to cope with learning everything about France. Yune is shown to be very hard working and kind, as she is always smiling and trying her best to adapt herself to the people surrounding her. She ends up captivating and attracting people around her whether it is by her Japanese looks or by her sweet personality.

An illustration from the manga featuring Yune and Claude Claudel

Yune stuck on a roof

Add a photo to this gallery 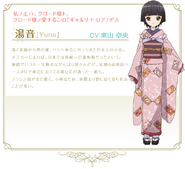 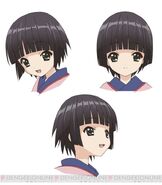 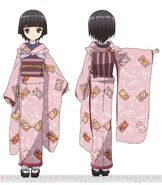 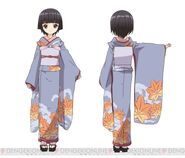 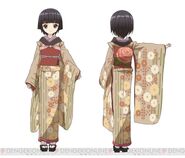 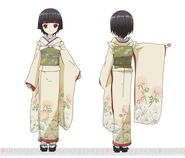 Add a photo to this gallery
Retrieved from "https://ikokumeiro.fandom.com/wiki/Yune?oldid=4357"
Community content is available under CC-BY-SA unless otherwise noted.